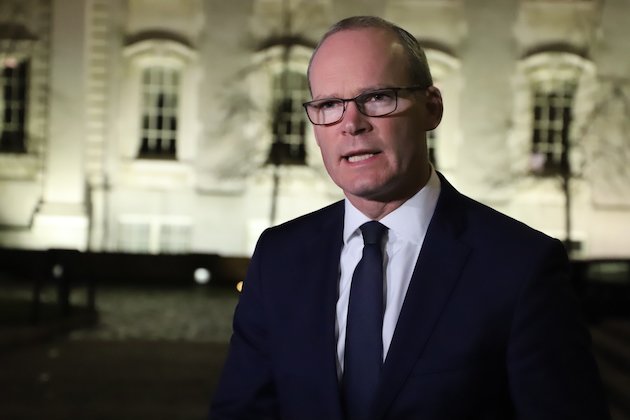 DUBLIN, Ireland - The Irish deputy leader has briefed the cabinet on the risks to Ireland of a no-deal Brexit and warned Irish businesses to prepare for such an eventuality.

Tánaiste and Minister for Foreign Affairs and Trade Simon Coveney on Tuesday outlined to the cabinet, work going on across the government to protect Ireland from the worst of the damage.

Following the discussions, Coveney called on Irish companies who trade with the UK to ensure they have their Economic Operator Registration and Identification (EORI) number.

The number is essential for any Irish company importing or exporting to a non-EU country. Without it their goods will not be allowed to enter ports or airports.

"There is no grey space here, if a company trades with the UK after Brexit it will need its EORI number from Revenue. We are doing everything we can to avoid a no-deal Brexit but the impasse at Westminster means the possibility is still there for the UK to leave without a deal at the end of October," the Tanaiste said Tuesday.

The registration process is simple and can be done by clicking here.

"For some of these firms they have never had to register for an EORI number as the vast majority of their trade is with the UK. However, Brexit means the UK will not be an EU country and the government cannot go into individual businesses and complete this registration to keep them trading," Coveney added.

"It's free to do, Revenue have made the process simple and I would urge managers and business owners to get the registration out of the way as soon as possible."

The major aspects of the document covered:

- Procurement of additional space and facilities at ports and airports to accommodate the significant increase in checks and procedures that will be required;

- Acceleration of recruitment and redeployment of customs and agriculture officers to be in place as needed to carry out these checks and procedures;

- Confirmation of 45 legislative changes that may be required and arrangements for urgent drafting;

- Preparation for accelerated or emergency procedures in the Oireachtas to ensure timely enactment of necessary legislation;

- Identification of a range of areas where further engagement with the European Commission and other Member States will be required, as part of the evolving response at EU level;

- Continued participation in all relevant EU fora and preparatory processes, which has thus far led to publication of 78 separate stakeholder notices to assist businesses and citizens;

- Further assessment of possible emergency measures that may be required in critical areas of medicines and food supply;

- Ensuring full continued application of the Common Travel Area, including the associated freedom of movement and access to public services for citizens;

- Continuation of the Government's extensive programme of stakeholder engagement;

- Continuation of the Government's national and regional communications campaign "Getting Brexit Ready" with a greater focus on a "no deal" Brexit.