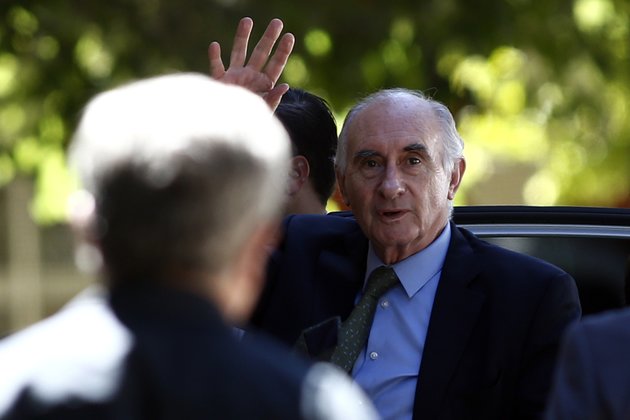 BUENOS AIRES, ARGENTINA - Former Argentine President Fernando De la Rua, who attracted voters with his image as an honest statesman and later left as the country plunged into its worst economic crisis, died Tuesday at age 81.

President Mauricio Macri sent a tweet expressing regrets at the death of de la Rua and saying, "His democratic trajectory deserves the recognition of all Argentines." The Telam state news agency said he died of cardiac and other complications.

De la Rua served from 1999 to December 2001, when he infamously escaped by helicopter from the rooftop of the pink presidential palace. It came after days of violent protests against his handling of the crisis amid rioting that caused dozens of deaths across Argentina.

De la Rua graduated with a law degree and was politically active from his youth in his native province of Cordoba. At the age of 36, he ran as vice president on the ticket with Ricardo Balbin in a 1973 presidential election that was won by the leader and founder of Peronism, Juan Domingo Peron.

De la Rua then lost against Raul Alfonsin in the first presidential election held after Argentina returned to democracy following the 1976-1983 military dictatorship.

After serving in both houses of Congress, he was elected as the first mayor of Buenos Aires in 1996. The Argentine capital had achieved its autonomy from federal control two years earlier following a constitutional reform.

De la Rua launched his successful presidential candidacy amid economic turmoil that began under President Carlos Menem and frustration by Argentines over what they believed was Menem's tolerance of entrenched corruption.

He took office in December 1999 with a popularity rating above 70 percent, a no-nonsense image and a pledge to end the flamboyance of "Menemismo" and improve the economy. But he was forced to order tax hikes, salary cuts for public workers and other unpopular measures and he left office with ratings in the single digits.

His image for transparency was tarred in 2000 when a journalistic investigation revealed allegations of bribes to opposition senators to pass a law weakening worker protections. The scandal caused the resignation of Vice President Carlos Alvarez and weakened the governing coalition.

The crisis in 2001-2002 was devastating. One of every five Argentines was jobless and some reported going hungry. The peso, de-linked from the dollar, lost nearly 70 percent of its value. Banks were barricaded behind sheet metal as thousands of protesters unsuccessfully tried to withdraw their savings.

At least 27 people died in protests and looting that swept Argentina in December 2001 as Argentina's economy unraveled and the country eventually defaulted on a record debt of more than $100 billion. After De la Rua left, Argentina saw a revolving door of five presidents over two weeks.

The final image of de la Rua's as president was his helicopter lifting off from the presidential palace rooftop as the sun set behind a haze of tear gas and a raging crowd hurled insults from the capital's historic Plaza de Mayo.

Distanced from politics, De la Rua would reappear in courts over alleged corruption and accusations that he had failed to prevent the killing of protesters during the crisis. He was absolved in both cases.

De la Rua is survived by his wife Ines Pertine, and his sons: Antonio, Fernando and Agustina.