US Returns First Group of Asylum-Seekers to Nuevo Laredo 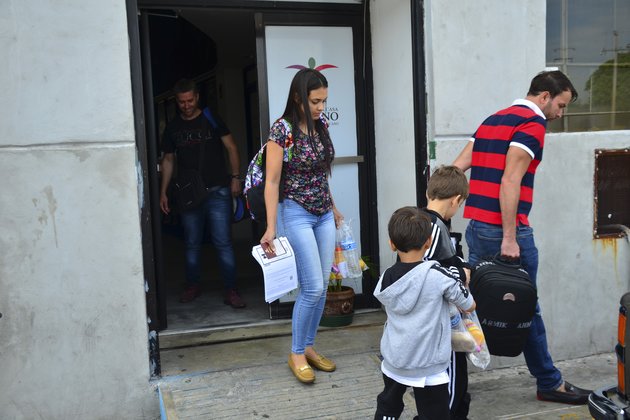 NUEVO LAREDO, MEXICO - The so-called Remain in Mexico program for U.S. asylum-seekers expanded to another Mexican border city Tuesday with the arrival of a first group of migrants to Nuevo Laredo.

The 10 migrants had crossed the border to seek U.S. asylum Monday and will now have to wait in Mexico as their applications are processed.

Lucia Ascencio of Venezuela had waited for three months in Nuevo Laredo with her husband and two young sons just for the chance to make her asylum petition in Laredo, Texas. She was stunned by her return to Mexico as they walked from the bridge carrying plastic bags containing a bottle of water, a bottle of juice and an orange.

"We hadn't thought that they were going to send us back," she said. Her family was given a date in September to return for the next step in their process.

A spokeswoman with Mexico's immigration agency confirmed that the first group of 10 returned Tuesday. U.S. Department of Homeland Security officials did not immediately comment.

The U.S. program, known formally as the Migrant Protection Protocols, acts as a deterrent for applicants who previously were released into the U.S. with notices to appear in court.

The program was already operating in the Mexican border cities of Tijuana, Mexicali and Ciudad Juarez. More than 18,000 mostly Central American migrants had been returned to those cities through the first week in July, according Mexican officials.

Nuevo Laredo is in Tamaulipas state, which the U.S. State Department warns Americans not to visit due to kidnappings and other crimes.

The program's expansion to Tamaulipas was announced after the U.S. and Mexico reached an agreement to avert threatened tariffs on Mexican exports last month.

The state is notorious for violent drug cartels that have controlled its border cities. But its long shared border with Texas also includes the busiest sector for U.S. Border Patrol's migrant apprehensions.

Migrant shelters in cities along Mexico's northern border have been swamped for months. Like Ascencio, migrants who want to apply for U.S. asylum wait for months to get the opportunity. The Remain in Mexico cities are even more affected because the migrants are sent back to wait for a process that could last more than a year.

At the Casa AMAR migrant shelter in Nuevo Laredo, director Aaron Mendez said there was already a "humanitarian crisis" that the shelter lacked the resources to deal with.

"If they could have 50 shelters here in the city it still wouldn't be enough," Mendez said. Authorities had originally said 150 to 200 migrants could be returned to Nuevo Laredo daily.

The federal government has pledged to assist border cities in accommodating the migrants, but details have been few and local shelters complain that the new government of President Andres Manuel Lopez Obrador has actually cut funding that they had received to support migrants. Ebrard said they had arranged with 16 shelters to provide places for migrants to stay, but that would only meet a fraction of the need.

Several civil rights organizations in the U.S. have sued the government over the Migrant Protection Protocols. Many migrants say they fear that staying in some Mexican border cities could jeopardize their personal safety.

NEW YORK, New York - U.S. support for airlines including a proposed $25 billion support package under negotiation, and an ...

WASHINGTON, DC - President Donald Trump interrupted his press briefing on the coronavirus on Tuesday night to enthuse over the ...

SAN DIEGO, California - A subsidiary of Cubic Corporation, GATR Technologies, of Huntsville, Alabama, has been awarded a $172 million ...

Thailand to get injection of $1.5bn from Asia Development Bank

BANGKOK, Thailand - The Asian Development Bank (ADB) announced on Tuesday it is providing a $1.5 billion loan to Thailand ...

3,000 miles. 43 days. Two rowers. One boat.That was the challenge that Anna and Cameron McLean set themselves by taking ...

BEIRUT, Lebanon - The world has been shocked by the severity of a huge blast which has rocked Beirut, killing ...

No precedent for Trump to take cut of TikTok deal

NEW YORK, New York - President Donald Trump's demand that the U.S. government get a cut from a potential Microsoft ...

Trump orders agencies to employ Americans ahead of foreigners

WASHINGTON, DC - President Donald Trump said Monday that he had fired the chair of the Tennessee Valley Authority, criticizing ...

Tensions between the United States and China are rising as the U.S. election nears, with tit-for-tat consulate closures, new U.S. ...

Do the Right Thing