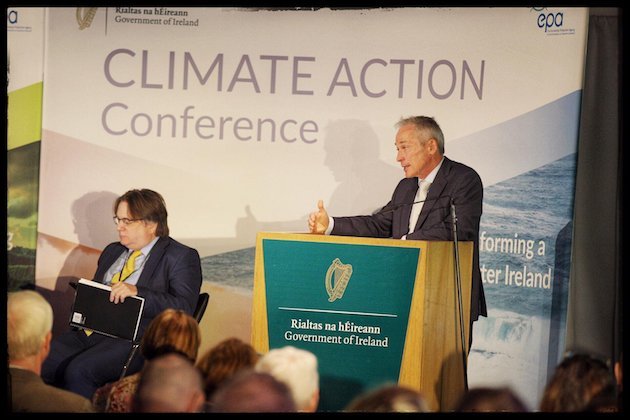 DUBLIN, Ireland - The Minister for Communications, Climate Action and Environment, Richard Bruton has rejected criticism and threats of legal action by the Irish Petroleum Industry Association (IPIA) over the Climate Action Fund.

The association, which represents 95% of the oil industry in Ireland including Applegreen, Circle K, Maxol and Texaco, had called for all monies raised from the levy to be applied to the agency's operations.

IPIA CEO Kevin McPartlan on Thursday said any surplus should be used to offset future NORA levy liabilities, or for the establishment of a fund to support users of oil-based fuels in the transition to low carbon alternatives.

The government however does not agree.

"The €500 million Climate Action fund is a crucial part of delivering Climate Action in Ireland. I regret that the oil industry is threatening legal action against the government," Bruton said Friday.

"I acknowledge that the actions which we are taking in the Climate Action Plan are a threat to the profits of the oil industry, in particular, our plans to move to electric vehicles and renewable heating systems will pose significant challenges to that industry. I hope that in the years ahead the oil industry concentrates on diversifying into renewable energy and supporting the transition towards net zero carbon emissions. It would be counter-productive for them to try to stall important climate action."

"The government in Project Ireland 2040 announced that the NORA levy would be re-purposed, so that the surplus in the fund would be invested into a new Climate Action Fund, which would be used to support projects across the country which can cut our relliance on fossil fuels. The required legislation was included on the government's legislative programme last Autumn," Bruton said.

"The projects we are supporting under the first round of the Fund will help cut our relliance on fossil fuels across transport, heat, electricity and agriculture, and demonstrates the types of investments we need to make. For example, the investment we are making in the ESB to develop a nationwide, state-of-the-art electric vehicle charging network, will be crucial to reducing range anxiety and supporting individuals to move to electric vehicles. The succesful projects under the first round of the fund will recieve €77 million, leveraging a total investment of €300 million."

"The government will not contemplate a situation where the oil industry can determine how the NORA fund surplus is invested or used. This levy is not paid for from the pockets of the oil industry, it is entirely paid by the consumer at the pump," the minister said.

"The IPIA suggest that the NORA surplus could be used to create a fund to support current users of oil based fuels to transition to low carbon alternatives. That is exactly what the government is doing through the establishment of the Climate Action Fund."

"However, it must be the minister who sets the critera for the projects that are to be supported in an independent way. In that way, we can ensure that the objectives of the Climate Action Plan are supported," Bruton argued.

"I cannot contemplate a situation where this money is handed back to industry, or that a new fund is created where industry could oversee or determine the types of projects to be supported. That is not a runner. Such an approach would not give the public confidence that the money was being used in a fair and indpendent way to support our climate objectives. The IPIA have also suggested that the surplus should be used to offset future levy liabilities. That is not a runner."