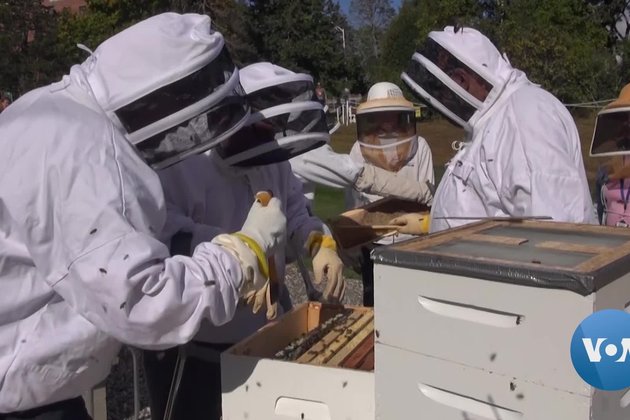 MANCHESTER, NEW HAMPSHIRE - These U.S. military veterans are busy as a bee tending to beehives on the grounds of the veterans medical center in Manchester, New Hampshire.

"It's fun. I love doing it," says Oscar Toce. "I used to be afraid of bees, but now I feel more comfortable around them."

Toce is among about a dozen veterans who are learning beekeeping as part of recreation therapy to help relieve post-traumatic stress, depression and anxiety.

Called Hives for Heroes, it is among the bee programs scattered across the U.S. to help veterans better their lives. Early research indicates that beekeeping provides therapeutic benefits for veterans by also helping them focus, relax and become more productive.

Since the New Hampshire program started six months ago, the veterans have been learning about the complex world of honeybees, which include queens, drones, and worker bees, and of course honey.

"Beekeeping is a lot more involved than I thought it would be," points out former marines Anthony Jenkins, who appreciates the crucial role bees play in the environment.

"I love coming here. It's just so exciting," says Vince Ylitalo, who spent nearly 40 years in the military, including two tours in Iraq where a roadside bomb blew up next to his convoy.

I had one of them actually blow up in my face and that upset me a lot, Ylitalo says. He quickly adds that he doesn't want to talk more about it because it hurts too much.

But what Ylitalo does like to talk about is the bees, which he finds soothing, especially since he can't tolerate loud noises due to post-traumatic stress disorder, a mental condition triggered by a terrifying event.

"I never knew I even had it until my mom told me two years later you got some serious problems," he explained. "I said no I don't, everybody else has the problem, not me."

Counseling and his service dog have helped relieve some of the anxiety and stress. However much to his surprise, it has been working with the bees that has been a lifesaver.

"It's crazy how much it helps you and your family life, and it's helped me the most over the longest period of time."

As veteran Wendi Zimmermann searches a beehive for the queen, she finds "the humming sounds of the bees calming and relaxing."

Beekeeping is helping her deal with trauma after a military colleague sexually assaulted her 25 years ago.

"It's affected my home life, my parenting, and it can be debilitating," she says.

Beekeeping keeps her focused and engaged in the present.

"I enjoy the teamwork and going past some of my stumbling blocks that I have within my anxiety and not let the outside buzz of the world get in there."

Recreation therapist Valerie Carter adds, "You can't focus on much else except the hives when you're in there with about 70,000 bees." She says the veterans often experience peace, calmness and a reduction of their mental health symptoms for several days after working with the bees.

The bees have changed Ylitalo's life by keeping him calm and giving him more confidence.

He is now passionate about beekeeping. "Oh boy, I look forward to seeing the bees again. I'm constantly thinking about the bees," he says with a big smile.

NEW YORK, New York - U.S. support for airlines including a proposed $25 billion support package under negotiation, and an ...

WASHINGTON, DC - President Donald Trump interrupted his press briefing on the coronavirus on Tuesday night to enthuse over the ...

SAN DIEGO, California - A subsidiary of Cubic Corporation, GATR Technologies, of Huntsville, Alabama, has been awarded a $172 million ...

Thailand to get injection of $1.5bn from Asia Development Bank

BANGKOK, Thailand - The Asian Development Bank (ADB) announced on Tuesday it is providing a $1.5 billion loan to Thailand ...

3,000 miles. 43 days. Two rowers. One boat.That was the challenge that Anna and Cameron McLean set themselves by taking ...

WASHINGTON, DC - The Trump administration said on Wednesday it was stepping up efforts to purge "untrusted" Chinese apps from ...

More than 100 villagers fled their homes in Myanmar's northern Shan state into China as fighting broke out between ethnic ...

BEIRUT, Lebanon - The world has been shocked by the severity of a huge blast which has rocked Beirut, killing ...

No precedent for Trump to take cut of TikTok deal

NEW YORK, New York - President Donald Trump's demand that the U.S. government get a cut from a potential Microsoft ...

Do the Right Thing