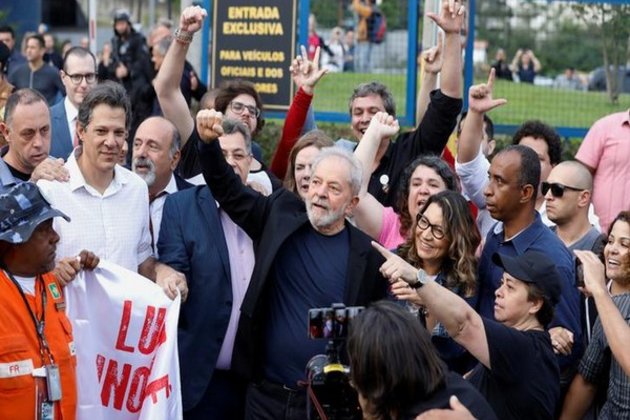 Silva walked out of the jail after 19 months, where he was serving a 12-year corruption sentence, after a supreme court ruling that delighted his supporters and infuriated followers of the far-right president Jair Bolsonaro.

After emerging out of the prison, the two-time president was greeted by family, friends, supporters and party faithful who were waving red flags and "Free Lula" signs outside the jail in the southern city of Curitiba.

Lula offered his "eternal gratitude" to his supporters camped outside and vowed that he hasn't been defeated yet.

"I leave here without hate. At the age of 74 my heart only has room for love," Lula said after his release.

Lula was imprisoned in April 2018 after a sentence for corruption and money laundering handed down by the judge Sergio Moro was upheld by an appeal court. His early release was made possible by a Supreme Court decision on Thursday night that determined defendants can remain free until they have exhausted all appeals. That ruling reversed a previous decision that had helped put dozens of powerful politicians and business leaders behind bars. Following his early release, the former president said that as a migrant from the poor northeast there isn't anything that can beat him, CNN reported.

Last year, he was leading presidential candidate up till the Brazilian Supreme court cancelled his candidature.

Though Lula is still ineligible to run for office yet his release is expected to heighten tensions in an already polarized Brazil.(ANI)

U.S. stocks on a roll, Nasdaq at new record high

NEW YORK, New York - Despite the number of Covid-19 cases in the United States topping 3 million on Wednesday, ...

In the past month, there's been an outpouring of support for Black Lives Matter from America's largest corporations.You might have ...

NEW YORK, New York - Stocks in Asia were mostly on Wednesday, in line with the sell-off globally a day ...

Vouchers instead of refunds in case of canceled flights disappoint

One of the lessons the current coronavirus pandemic has taught us is that we depend on electronic devices more than ...

TEHRAN (Tasnim) - China on Wednesday defended the World Health Organization and lashed out at the US decision to withdraw ...

Bullying of International court and Bank of England laid bare

On January 9, 2020, Ambassador Karen Pierce-the United Kingdom's permanent representative to the United Nations-spoke at a meeting on the ...

Countries across the globe re-thinking reopening as coronavirus surges

As coronavirus cases around the world approach 11.5 million, governments are struggling with how to reopen their economies, leading some ...

North Dakota pipeline supported by Trump ordered to be closed

A U.S. federal judge ruled Monday that a controversial pipeline that runs through Native American lands in North Dakota be ...