Mexican President Visits US With Focus on Trade 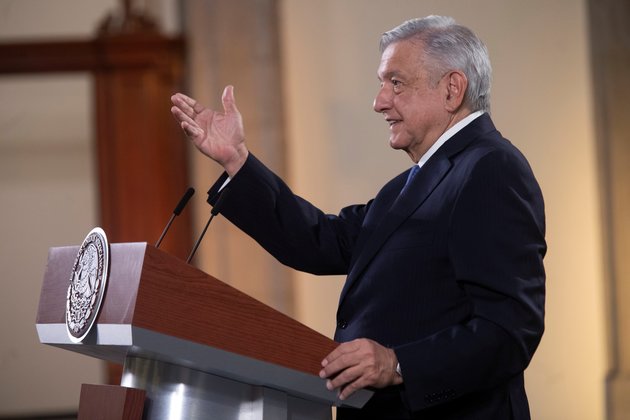 Mexican President Andres Manuel Lopez Obrador is in Washington for meetings Wednesday with U.S. President Donald Trump days after a new trade deal among the two countries and Canada went into effect.

Speaking to reporters in Mexico City before his departure Tuesday, Lopez Obrador repeatedly said in response to questions about raising other issues such as immigration policy that his focus in the talks would be on the trade deal.

"It is always important that there be cooperation for development, but now in a circumstance of global economic crisis this treaty is going to help us a lot, it is very timely," Lopez Obrador said.

He noted the economic challenges facing Mexico, like many other countries, during the coronavirus pandemic and stressed the need for Mexico to have good relations with its neighbor.

The Mexican leaders noted the agenda for bilateral talks does include other topics, and on those his delegation, which includes Foreign Secretary Marcelo Ebrard Casaubon and Economic Secretary Graciela Marquez Colin, will not take a confrontational approach, but rather try to have a dialogue of understanding with their U.S. counterparts.

Trump, in brief comments ahead of the Lopez Obrador's visit, said the two will have "quite a meeting."

"He's a good man. He's a friend of mine. And we have a great relationship with Mexico," Trump said.

The U.S.-Mexico-Canada Agreement updated the 1990s North American Trade Agreement and was a major policy push of Trump, who cast the former trade deal as harmful to U.S. businesses and workers.

In addition to private talks between Trump and Lopez Obrador and wider meetings with their advisers, the two leaders will also take part in a dinner Wednesday night with business leaders from both countries.

The Mexican foreign ministry said before going to the White House, Lopez Obrador will make visits to the Lincoln Memorial and a statue of former Mexican President Benito Juarez in Washington.

NEW YORK, New York - U.S stocks faltered on Friday despite better-than-expected jobs growth in July, and a rebound in ...

Switch is the latest data centre operator to post strong financial results as the global Covid-19 pandemic continues to fail ...

Asian markets topple over after Trump gets stuck into China again

SYDNEY, Australia - Stocks in Asia tanked on Friday as the U.S. took a big stick to China again, banning ...

A gunman with psychiatric problems took six people hostage at a bank in Le Havre, northern France, before giving himself ...

DUBLIN, Ireland - While its future on the other side of the Atlantic, and in the Pacific, is up in ...

Seventeen dead, 123 injured as jet breaks in two on landing in India

DUBAI, UAE - An Air India Express flight from Dubai with 190 people on board skidded off a runway and ...

Beirut explosion may be turning point for Lebanon

DUSHANBE - Hundreds of fans have come to bid farewell to one of Tajikistan's most popular singers, Bahrom Ghafuri, who ...

Preparedness for nuclear attack or event at lowest point since 1945

It is important to mark the solemn 75th anniversary of the first and only use of atomic weapons against cities ...