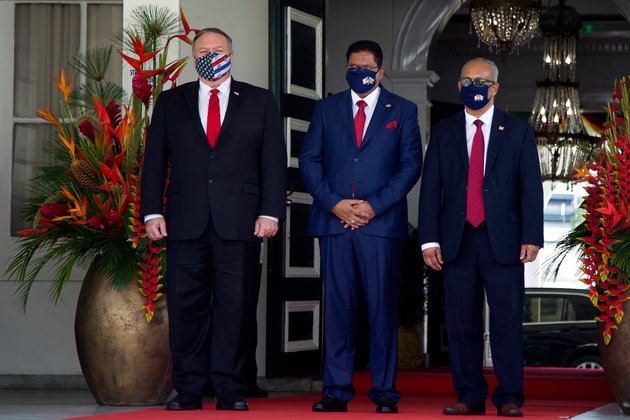 In a historic first-ever trip to Suriname and Guyana by a U.S. secretary of state, Mike Pompeo met with those nations' leaders to discuss economic development in the wake of recent oil discoveries in both countries.

In 2015, Exxon announced it had discovered a large oil reserve off the coast of Guyana, South America's second-poorest nation. BBC has reported that the 5.5 billion barrels' worth of crude could make it the continent's wealthiest nation.

Exxon is already working in Suriname.

During a brief appearance Friday, Ali and Pompeo both said they had not discussed Exxon's deal with Guyana.

Pompeo said the negotiations were between Exxon and the Guyanese government, something he called "the American model."

A State Department official told reporters that Pompeo "will highlight through these meetings how U.S. companies throughout the hemisphere invest responsibly and transparently."

"This draws a stark contrast with China, whose predatory loans and vanity projects saddle countries in the Western Hemisphere with unsustainable debts," the official said.

China has been courting both Guyana and Suriname as they seek foreign investment.

Eric Farnsworth, vice president of the Council of the Americas and a former State Department official, told AFP that getting a U.S. secretary of state to visit Latin America or the Caribbean was "a heavy lift."

"For him to go to both of these countries is extraordinary and shows that something big is happening."

During a joint press conference Friday, Pompeo and Ali also discussed the need for democracy in Venezuela, reiterating the call for that country's President Nicolas Maduro to step down.

"We know that the Maduro regime has decimated the people of Venezuela and that Maduro himself is an indicted narcotics trafficker. That means he has to leave," the secretary of state said, referencing U.S. drug trafficking charges against Maduro. "The United States and dozens of countries have made clear that Juan Guaido is the duly elected leader of Venezuela. This is the objective - we want democracy and freedom and the rule of law."

From Guyana, Pompeo travels to Brazil later Friday for talks with the Brazilian foreign minister.

SYDNEY, NSW, Australia - Asian stocks finally caught up with their global counterparts on Friday, with major indices in all ...

WASHINGTON, DC - There will be no new coronavirus economic relief package in the U.S. before next Tuesday's presidential and ...

OTTAWA, Canada - Five major aerospace companies in Canada and Boeing have inked an agreement which will see a multi-decade, ...

WASHINGTON, DC - With just a few days until voters cast the last ballots in the U.S. presidential election, the ...

SAINT-LOUIS, Senegal - In what has been described as the deadliest shipwreck recorded so far this year, at least 140 ...

NICE, France - A man wielding a knife on Thursday killed three people in an attack at the Basilica of ...

Golfing great comes out in support of Trump re-election

Snowden, hero to many, traitor to others, is awarded Russian residency

Chinese stocks gain for third day in row, most other Asian markets dip

SYDNEY, NSW, Australia - Asian investors on Thursday ignored the ructions overnight on Wall Street and around the globe, keeping ...