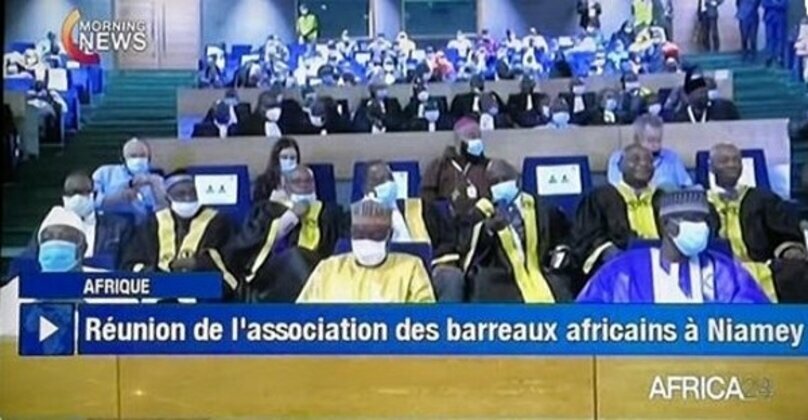 Venezuelan government envoy Alex Saab was flown to the US on Saturday after more than a year detained in Cape Verde. The Venezuelan government denounced the "kidnapping" of the businessman, recalling that he carries a diplomatic passport, while his defense team pointed the finger at irregularities and political pressure as the extradition requestmoved through the Cape Verdean legal system.

In the following piece, written before the extradition, lawyer John Philpot and solidarity activist Roger Harris recap efforts to draw attention to the case and its implications.

An internationalFree Alex Saabdelegation attended the October 3-7 annual meeting of the African Bar Association in Niamey, Niger. Venezuelan diplomat Alex Saab has been under arrest in Cabo Verde since June 2020 by orders of the US and is fighting extradition to Miami. His "crime" is organizing humanitarian missions to procure food and medicine for Venezuela in "violation" of the illegal US blockade.

The Free Alex Saab delegation was well received by the conference, attended by many honored African leaders, including President of Niger Mohamed Bazoum along with the former presidents of Nigeria, Sierra Leone, and Liberia. Some conferees were already familiar with the egregious US judicial over-reach, which resulted in Mr. Saab being seized from his airplane, when it made a fuel stop in Cabo Verde on its way from Caracas to Tehran.

The fifty-year-oldAfrican Bar Association(AFBAR) is as a professional body uniting individual lawyers and national legal associations in Africa. The association brings together the five African sub-regional associations spread over the continent. AFBAR seeks to foster policies to better the continent's socio-economic and political development.

AFBAR President Hannibal Uwaifo delivered the opening address on respecting the Rule of Law in strong opposition to military coups. A theme running through the conference was the importance of resolving African problems in Africa free from western interference. For example, AFBAR will not support cooperation with the International Criminal Court investigation of the Nigerian military and Boko Haram unless the investigation includes how Boko Haram is financed.

One participant, a young lawyer, explained that independence requires full national economic and military control. In his opinion, with French and especiallyUS military presencein many countries, politicians may take their orders from the outside powers.

Some African countries are independent such as Algeria, which rigorously controls its own borders and its economy without neo-colonial control. Evidently Cabo Verde, one of the smallest and poorest countries in the world, finds it difficult to resist US pressure regarding Mr. Saab.

The regional Economic Community of West Africa (ECOWAS) Court had ordered Cabo Verde to not only release but pay $200,000 in damages to Mr. Saab. That was on March 15, 2021, and Cabo Verde has still not complied with the court order. Nevertheless, Cabo Verde had signed and ratified the treaty creating the court, attended the hearings, is a full member of ECOWAS, and has at least one judge on the court.

As the AFBAR conference reaffirmed, it is the duty of the bar associations to advocate for the ECOWAS Court. The conference session on the ECOWAS Court explained clearly that it was not an appeal court, but an international court of primary jurisdiction created by treaty. The Saab delegation was afforded full status at the session, where delegates Felipe Teixeira and Laila El Dine spoke with AFBAR President Uwaifo in attendance.

John Philpot presented and distributed copies of the "We don't deserve this - the impact and consequences of US Sanctions" report, which addresses more broadly the unilateral coercive measures imposed on some three dozen countries 15 of which are in Africa comprising a third of humanity. Philpot, along with Rick Sterling and David Paul, authored the comprehensive report for theSanctions Kill Coalition. A free PDF of the report is availableonline.

At a session on contemporary legal problems and the Rule of Law, Laila El Dine and John Philpot presented the Alex Saab case raising issues which go to the substance of his illegal detention. AFBAR President Uwaifo once again spoke of the need to take positive action to ensure respect for March 15 ECOWAS Court decision.

John Philpot stressed that these critical cases can be won, citing the recent campaign release of Meng Wanzhou. She had been illegally detained by Canada for more than 1000 days on an attempt to extradite her concerning a transaction between a Chinese bank and Iran, allegedly in violation of US sanctions on Iran. US judicial overreach can threaten diplomats and businesspersons worldwide if this tendency is not terminated.

AFBAR has taken the issue the ECOWAS Court seriously, although the vice president of the court lamented the lack of enforcement mechanisms. Proposals were offered such as imposing sanctions against Cabo Verde officials, which would be legally constructed as a function of the regional ECOWAS community and not illegally as with the unilateral US sanctions. Other measures considered were expelling Cabo Verde from the ECOWAS and special legal procedures. A committee was formed to take this issue on actively, presided by Chief Prosecutor of Liberia Sayma Syrenius Cephis.

The views expressed in this article are the authors'own and do not necessarily reflect those of the Venezuelanalysis editorial staff.

SYDNEY, NSW, Australia - Asian stock markets were wary on Thursday after major falls on local markets and overseas over ...

Big jump in can costs could close many small craft beers: officials

BROOMFIELD, Colorado: One of the world's largest suppliers of aluminum cans, Ball Corp, is increasing the minimum number of cans ...

NEW YORK, New York - A single case of Omicron, that being the first in the U.S., sent stocks into ...

WASHINGTON D.C.: As part of a settlement with the Federal Communications Commission (FCC), following a 12-hour outage in June 2020 ...

NEW DELHI, India: The Starlink Internet Services of Elon Musk's SpaceX aerospace company has been told by the Indian government ...

PARIS, France: The rebuilding of Notre Dame Cathedral in Paris has come under fire from critics, after the new plans ...

Lebanese take to streets as currency drops 90% in value

BEIRUT, Lebanon: Protesting Lebanese took to the streets, lighting tires on fire and blocking roads throughout Lebanon to express their ...

Stowaway survives in landing gear on Guatemala flight to Miami

MIAMI, Florida: A stowaway has been found alive in the landing gear of an American Airlines plane that flew from ...

PARIS, France: The French government is offering increased autonomy for the Caribbean island of Guadeloupe, after COVID-19-related riots and long-running ...

SAGAING, Myanmar - According to local sources, air attacks and shelling drove thousands of people from at least nine villages ...