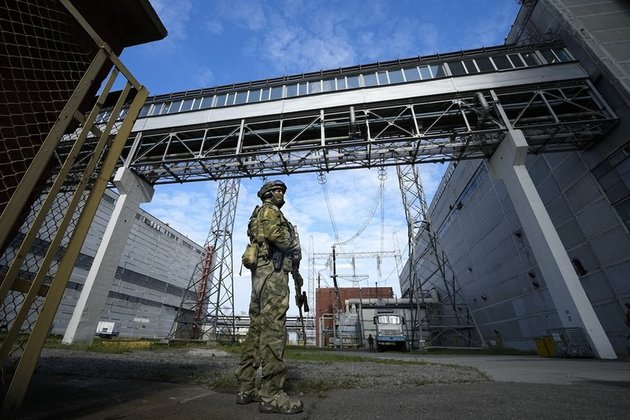 Kiev's shelling of the Zaporozhye power plant puts millions of lives at risk, the Russian Foreign Ministry has said

Ukraine's shelling of the Zaporozhye nuclear power plant is an act of terrorism that could trigger a disaster that would eclipse the 1986 Chernobyl incident, the Russian Foreign Ministry said on Thursday.

"In recent days, Ukrainian forces have been repeatedly shelling the territory of the Zaporozhye NPP, which is an act of nuclear terrorism. Such actions by the Kiev regime could lead to a disaster on a scale that would dwarf the accident at the Chernobyl nuclear power plant," the Russian Foreign Ministry's deputy spokesperson, Ivan Nechaev, told a news briefing in Moscow.

According to the diplomat, should such a disaster occur, radiation would hit not only nearby regions in Ukraine, Russia, the Donetsk and Lugansk People's Republics, but also European countries, putting millions of lives at risk.

Nechaev also said he hoped the international community would pay attention to the situation at the site. "We are in favor of organizing an IAEA [International Atomic Energy Agency] mission to the Zaporozhye NPP, which was disrupted in June due to the decision of the UN Secretariat's Department of Safety and Security," he said.

On Thursday, Zaporozhye officials claimed that Russian air defense systems had thwarted a missile and drone attack on the NPP and the nearby city of Energodar.

"[The Ukrainian military] are trying to bombard the peaceful town and the Zaporozhye nuclear power plant with MLRS [multiple launch rocket systems], heavy artillery and strike UAVs [unmanned aerial vehicles]," said Vladimir Rogov, a member of the chief council of the Zaporozhye Region military-civilian administration, adding that all the attacks were repelled and Ukrainian artillery positions hit by counter-battery fire.

On Wednesday, the Group of Seven (G7), consisting of Canada, France, Germany, Italy, Japan, the UK, and the US, called on Russia to cede the nuclear power plant that was seized by Moscow's forces in early March back to Ukraine. The group said the move would ensure the facility's "safe and secure operations." The nuclear power plant has been taken over by Russian troops, but is still being operated and maintained by Ukrainian crews.

One day previous, Moscow summoned an emergency session of the UN Security Council to discuss "Ukrainian provocations," including a series of shelling attacks on the NPP. The meeting is expected to take place on Thursday.

On Monday, Russian Foreign Ministry spokeswoman Maria Zakharova accused Kiev of holding the whole of Europe hostage, saying its government officials "apparently won't hesitate to burn it for the sake of their Nazi idols." At the same time, Kiev has denied all allegations, claiming it was the Russian troops that shelled the facility to frame Ukrainian forces.

According to the International Atomic Energy Agency, the Zaporozhye plant is the largest in Europe and has up to 60 tons of enriched uranium and plutonium in its reactor cores and spent fuel storage.

After Covid, US struggles to process Indian visa applications

WASHINGTON D.C.: U.S. Secretary of State Antony Blinken said the U.S. is working to reduce the backlog in visa applications ...

US 50 states agree to standardized connections at EV charging stations

WASHINGTON D.C.: The U.S. Department of Transportation has approved the electric vehicle charging station plans in all 50 American states, ...

BEIJING, China: During a ceremony this week, China certified its C919 narrow-body passenger jet, which is part of the country's ...

NEW YORK, New York - It was another volatile day on Wall Street on Friday as investors weighed up more ...

Asian stocks close out month and quarter on dismal note

SYDNEY, NSW, Australia - Asian stocks closed out the month and the quarter on a dismal note Friday."The 'troubling triad' ...

After sanctions, Russia says will build own aircraft, not rely on west

MOSCOW, Russia: Russia's state-owned engineering firm Rostec has said that the country's aviation industry will continue operating without the West, ...

US claims American-JetBlue alliance is anti-competitive

BOSTON, Massachusetts: The U.S. Justice Department has asked a Boston judge to force American Airlines and JetBlue Airways to scrap ...

Abortion regardless of marital status legalized by India's top court

NEW DELHI, India: In a decision widely hailed by women's rights activists, India's top court upheld the right of a ...

Another delay for US moon rocket as hurricane approaches Florida

CAPE CANAVERAL, Florida: NASA has announced that it will roll its giant moon rocket, the Space Launch System, off its ...

MIAMI, Florida: As Hurricane Ian crashes across the Caribbean, bringing high winds and torrential rains, Florida residents are scrambling to ...

KRAKOW, Poland: Organizers said an April Roger Waters concert planned in Krakow, Poland, has been canceled due to Waters' support ...