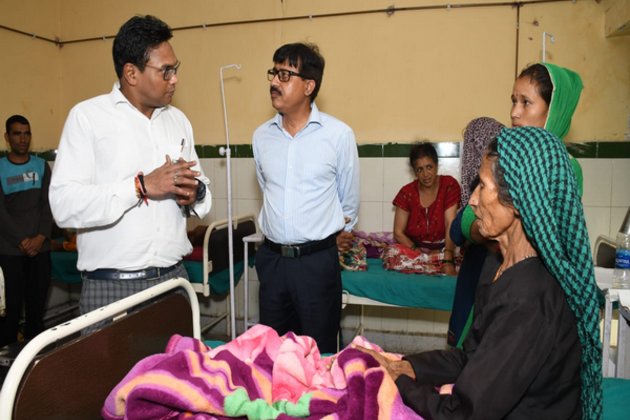 Chamoli (Uttarakhand) [India], August 13 (ANI): In a move to strengthen the healthcare system in the state, the Uttarakhand government on Saturday directed the officers of the Health Department to make available proposals at the earliest for infrastructure development, deployment of necessary health equipment and specialist doctors for better health facilities in Chamoli.

Dr R Rajesh Kumar, Secretary in-charge of the Health department of Uttarakhand and Mission Director of the National Health Mission, inspected the hospitals in Chamoli district and took stock of the health arrangements. He emphasized on further strengthening the health systems in the marginal district.

The Secretary-in-Charge, who arrived on a two-day visit to the frontier district of Chamoli, visited Public Healthcare Center (PHC) Gauchar, Sub District Hospital Karnprayag, Base Hospital Simli on the first day on Friday and met the local people and inquired about the health arrangements.

He immediately transferred the building of Base Hospital, Simli area of the state to the department and instructed the health department to start the operation of OPD from August 26.

During this, he inquired about the condition of the patients while taking stock of the medical arrangements like delivery wards, medical arrangements of TV patients, oxygen plants, vaccination centres, pending construction works in hospitals under National Health Mission (NHM), Ayushman cards etc. He instructed to take special care of cleanliness in the hospital.

During talks with the secretary-in-charge, the regional public representatives raised the problem of non-deployment of physicians, radiologists, orthopaedic surgeons, paediatricians in the sub-district hospital.

In Simli, ASHA workers demanded the in-charge secretary to resolve the other problems along with the honorarium. While meeting the Bhotia families in Devlibagad village, the secretary in-charge inquired about all the health facilities including Ayushman card.

The secretary-in-charge, after reaching the district headquarters late in the evening, reviewed the progress of various schemes run through the health department in the collectorate auditorium. He said that our aim is to strengthen health facilities in marginal and remote areas so that people in remote areas can get health benefits at the local level.

He directed the officers of the Health Department to make available proposals at the earliest for infrastructure development, deployment of necessary health equipment and specialist doctors for better health facilities in the district. Apart from this, setting five priorities for the development of health facilities in the marginal district, the CMs were asked to provide their proposal.

He directed that the pending construction works in the hospitals under National Health Mission (NHM) should be completed soon. During this, he also encouraged all the doctors to render their services promptly in remote areas.

On Saturday, the second day of the frontier district tour, the in-charge secretary inspected the district hospital and took stock of the health arrangements. During this, he inspected ICU, Emergency Ward, X-Ray Centre, Maternity Room, Oxygen Plant, Blood Bank etc. He said that a city scan machine facility would soon be made available in the district hospital through the World Bank. Along with this, other specialist doctors including gynaecologists would be deployed. When the surgeon was not present in the hospital, he asked to write a letter to DG Health in this regard. During this, he said that a blood bank would also be established at Base Hospital, Simli.

He said that it is necessary to have health infrastructure, manpower and necessary equipment in the hospital. Our aim is to provide better health facilities in remote areas by establishing harmony in this direction, the official said. (ANI)

After Covid, US struggles to process Indian visa applications

WASHINGTON D.C.: U.S. Secretary of State Antony Blinken said the U.S. is working to reduce the backlog in visa applications ...

US 50 states agree to standardized connections at EV charging stations

WASHINGTON D.C.: The U.S. Department of Transportation has approved the electric vehicle charging station plans in all 50 American states, ...

BEIJING, China: During a ceremony this week, China certified its C919 narrow-body passenger jet, which is part of the country's ...

NEW YORK, New York - It was another volatile day on Wall Street on Friday as investors weighed up more ...

Asian stocks close out month and quarter on dismal note

SYDNEY, NSW, Australia - Asian stocks closed out the month and the quarter on a dismal note Friday."The 'troubling triad' ...

After sanctions, Russia says will build own aircraft, not rely on west

MOSCOW, Russia: Russia's state-owned engineering firm Rostec has said that the country's aviation industry will continue operating without the West, ...

US claims American-JetBlue alliance is anti-competitive

BOSTON, Massachusetts: The U.S. Justice Department has asked a Boston judge to force American Airlines and JetBlue Airways to scrap ...

Abortion regardless of marital status legalized by India's top court

NEW DELHI, India: In a decision widely hailed by women's rights activists, India's top court upheld the right of a ...

Another delay for US moon rocket as hurricane approaches Florida

CAPE CANAVERAL, Florida: NASA has announced that it will roll its giant moon rocket, the Space Launch System, off its ...

MIAMI, Florida: As Hurricane Ian crashes across the Caribbean, bringing high winds and torrential rains, Florida residents are scrambling to ...

KRAKOW, Poland: Organizers said an April Roger Waters concert planned in Krakow, Poland, has been canceled due to Waters' support ...