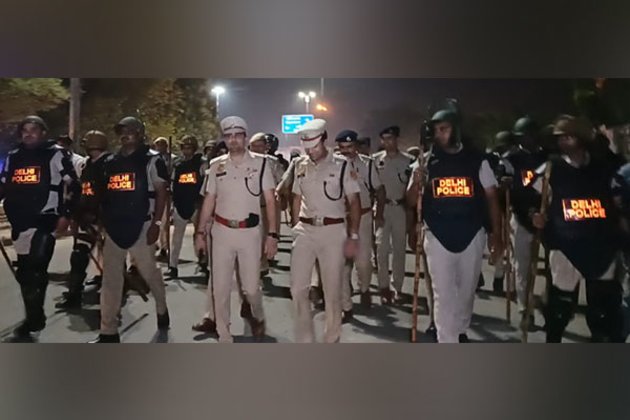 New Delhi [India], September 29 (ANI): After the Centre's ban on the Popular Front of India (PFI) for five years, Delhi Police is on high alert in order to maintain the law and order situation.

Police activity has amplified in different areas of Delhi. Deputy Commissioner of Police (DCPs) in different districts have also taken to the streets to take stock of the situation.

The North East district, where the riots took place in 2020, has a mixed population of communities. Recently, five people linked to PFI were arrested by Delhi Police from the area.

Speaking to ANI, DCP Sanjay Kumar said, "We are on alert mode. We are ready to handle any situation. North East district has been put under active Yellow scheme, Orange scheme and Red scheme. Today, an exercise was conducted in North East district to check the effectiveness of the Yellow Scheme which is meant to deal with any exigency in the district."In the yellow scheme, teams of ACPs and SHO move to the place of disturbance immediately on receipt of a message. At the same time, another reserve component of force are put on high alert. Vajra, water canon and other resources also move to the target point, said the official.

According to Delhi Police, additional police forces will also be deployed in sensitive areas of the national capital so that immediate action can be taken in case of any untoward incident.

Days after arresting over 100 PFI cadres in multiple raids carried out across the country linked to the PFI cadres by the National Investigation Agency, Enforcement Directorate and state agencies as well as police forces, the Centre issued a ban against the outfit and its affiliates with "immediate effect".

The Central government has directed all States and the Union Territories (UTs) to "exercise" powers of the Unlawful Activities (Prevention) Act against the outfit and its affiliates.

Besides PFI, the state governments and administration in UTs have been asked to use the powers of UAPA against its associates or affiliates or fronts including Rehab India Foundation (RIF), Campus Front of India (CFI), All India Imams Council (AIIC), National Confederation of Human Rights Organization (NCHRO), National Women's Front, Junior Front, Empower India Foundation and Rehab Foundation, Kerala. These PFI affiliates have also been banned by the Centre for five years under UAPA.

The Centre's notification clearly mentioned that the ban has been imposed against PFI and its associates for "indulging in unlawful activities, which are prejudicial to the integrity, sovereignty and security of the country and have the potential of disturbing public peace and communal harmony of the country and supporting militancy in the country.

The Centre issued the ban citing the investigation of its agencies, mentioning "the investigations have established clear linkages between PFI and its associates or affiliates or fronts".

It is also accused that "some of the PFI's founding members are the leaders of Students Islamic Movement of India (SIMI) and PFI has linkages with Jamat-ul Mujahideen Bangladesh (JMB), both of which are proscribed organisations".

The Centre's action also mentioned findings of agencies about a number of "instances of international linkages of PFI with Global Terrorist Groups like Islamic State of Iraq and Syria (ISIS)".

The PFI and its associates are also charged for working covertly to increase the radicalization of one community by promoting a sense of insecurity in the country, which is substantiated by the fact that some PFI cadres have joined international terrorist organisations"The PFI is further accused of its involvement in several criminal and terror cases as well as sheer disrespect towards the constitutional authority of the country.

With funds and ideological support from outside, the PFI and its affiliates have been further accused of becoming a major threat to the internal security of the country.