Families of Detained Protesters in Peru Clamor for News 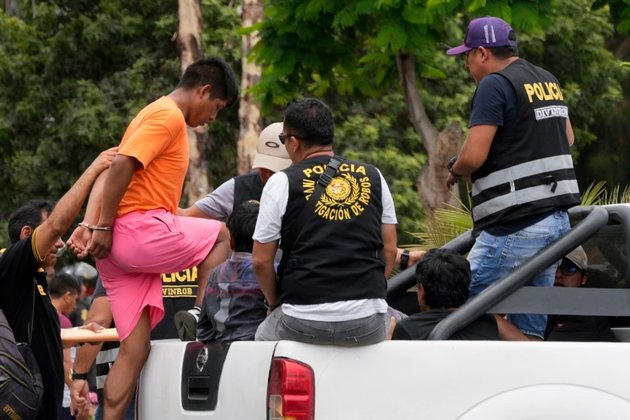 Friends and family of nearly 200 people arrested during a protest against Peru's government waited outside a Lima detention center Sunday searching for any news of their loved ones.

'I want to know where my brother is,' said Domitila Quispe, one of many people clustered outside the National Police Directorate Against Terrorism (DIRCOTE) headquarters.

A day earlier, an armored police vehicle rammed through a metal gate to the University of San Marcos, where numerous protesters had set up a temporary camp.

Police rushed through throngs of protesters in their raid of the camp, then left with 193 detainees.

'I have not slept,' Quispe said, worried about the fate of her brother. 'He sent me a message through WhatsApp to say he was arrested.'

Quispe, 47, and her 40-year-old brother, Silverio, came to Lima from the Andean region of Huancavelica to take part in mass protests demanding the removal of President Dina Boluarte.

She has been in power since early December when her predecessor, Pedro Castillo, was ousted from office and arrested for attempting to dissolve Congress and rule by decree.

Protests have been ongoing since Castillo's ouster, leaving 46 people dead and prompting the government to impose a state of emergency in violence-hit areas.

Carrying bowls of chicken soup, bread, containers of water, and toiletries, some 30 family members of the detained came to the DIRCOTE headquarters, asking for permission to deliver the food and hygiene materials to their loved ones.

Family member perused lists of detained people posted on the front entrance to the facility.

'We have come to Lima to make them respect our rights,' said Hector Apaza, who arrived from an area near Puno, the high mountain border city with Bolivia.

Julia Quispe, 73, said she escaped the university, but that police rounded up three of her friends from the town of San Francisco, in south central Ayacucho state.

'I ask that my three comrades be freed. We came together, and we will remain until they are freed,' she said.