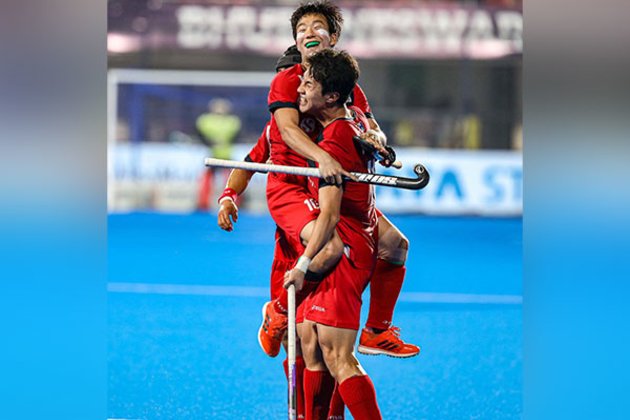 Both sides were locked at five goals apiece at the end of regulation time at the Kalinga Stadium in Bhubaneswar on Monday.

They will be playing three-time champions Netherlands in the quarterfinals.

Argentina gained an early lead in the seventh minute with a strike from Maico Casella, who made the most of the opportunity obtained courtesy some sloppy work from Korean goalie Kim Jaehyeon. Maico lifted it over Kim, who made a desperate dive but could not stop the goal.

Korea earned a penalty corner in the ninth minute but failed to convert it. The scoreline read 1-0 in favour of Argentina at the end of the first quarter.

Korea made things even in the 17th minute courtesy a goal from Kim Sunghyun, who was able to capitalise well on a cross received from Taeil Hwang.

A 19th-minute PC was converted by Jeong Junwoo gave Korea the lead for the very first time.

But Argentina was quick to bounce back from 1-2 trailing, with goals from Keenan Nicholas (20th minute) and a Nicolas Della Torre (23rd minute, PC strike) putting them back into the game with a 3-2 lead.

Argentina tried to double their lead in the 29th minute, but Lucas Vila failed to hit the target.

At the end of the second quarter and first half, the scoreline read 3-2 in favour of Argentina.

In the third quarter, Korea hit the equaliser in the 40th minute, courtesy of a PC conversion from Jonghyun Jang. But Argentina restored their dominance in the game in the very same minute as they got a penalty stroke as well and Della Torre's drag-flick did wonders for his side.

In the 41st minute, Argentina was reduced to 10 men after a green card was shown to Martin Ferreiro.

Korea received a PC in the 43rd minute, but the third quarter ended with Argentina leading 4-3.

In the final quarter, Keenan's goal in 46th minute, which saw him put a rebound back into the net, gave a cushion to Argentina. The scoreline read 5-3.

However, two successful PC conversions from Jonghyun (49th minute) and Lee Nam-yong (55th minute) made things even and the full time ended with scoreline reading 5-5.

The match had to be decided via a penalty shootout. Jungjun Lee, JI Woo Cheon, Manjae Jung found the net for Korea while only Keenan and Maico could score for Argentina.

The world's number seven side was knocked out by 11th-ranked Korea. (ANI)